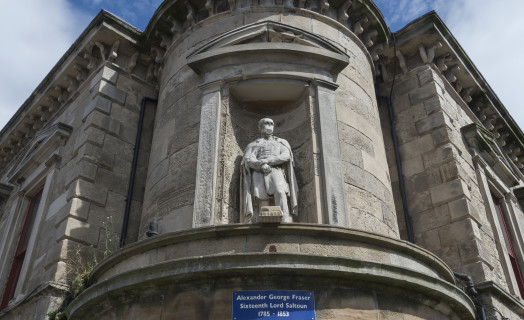 That marble figure has been a fixture up there on the corner of the Square since the 1870’s – but sculptures don’t make themselves.

Who was the artist? What was his other work like? And how did he get the commission ?

When Karolina Allen, our friendly conservator, gets to work creating Lord Saltoun’s new face, she needs to know how that first freshly carved portrait might have looked. We don’t have any photos, or even very clear drawings– so some detective work is needed to figure out how the statue looked when new.
The sculptor Edward Bowring Stephens was born in Exeter in 1815. At  20, he moved to London to attend the Royal Academy, then travelling to Rome in 1839 to spend three years refining his craft. His early works were dynamic groups of mythical figures – good for showing off the sculptor’s skills:  his grasp of form; how well he portrayed movement and mood. He won prizes for these both as a student and in later life.
In 1845 Edward helped decorate the summer pavilion at Buckingham Palace – sending two of his works to the Great Exhibition of 1851 – and exhibited many single portraits and groups, frequently of contemporary Devon notables. The marble portraits John Rolle, 1st Baron Rolle and Hugh, Earl Fortescue KG, show his skill as a sculptor and the fine detail which would have characterised  Lord Saltoun’s statue when new.  Hard to believe now… you can click on the images for a better look. 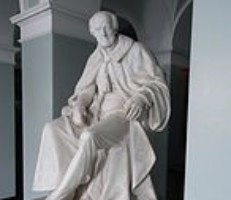 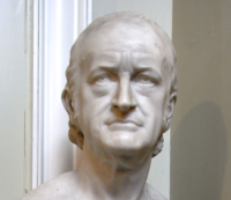 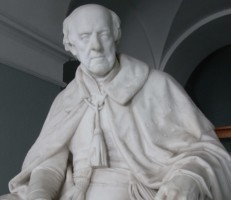 Several portraits were made to adorn the streets of Stephens’ native Devon. This standing figure of Francis Russell, 7th Duke of Bedford in Tavistock, carved from a harder stone has aged rather better than Lord Saltoun’s likeness. 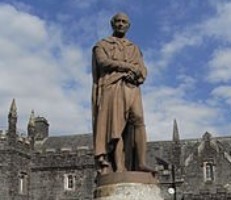 The Duke of Bedford 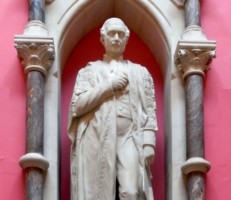 Stephens spent his life in London and Exeter, helping set up The Exeter School of Art, which became a Memorial to Prince Albert who died in 1861. He even carved a statue of the Prince, donating his labour.

We don’t know how Stephens,  a Devon man, got the job of carving 17th Earl’s portrait for Fraserburgh – Alexander Fraser maybe knew Stephens’ other aristocratic clients or had seen work shown in London – there’s certainly no evidence the sculptor ever visited the Broch.

Edward Bowring Stephens died at his London home in 1882. There are many of his works still in existence.

You’ll have noticed by the time the statue was removed from the building, it was in a poor state. There are several reasons for this and I’ll talk about them in my next post.