The Old Parish Register or Fraserburgh gives Glover’s date of baptism as 12 July. The witnesses were bank agents.

Thomas Blake Glover spent the first six years of his life in Fraserburgh, at that time fast expanding as a fishing and trading port.

In 1844, the family moved first to coastguard stations at Grimsby, then Collieston in Aberdeenshire, then finally to the Bridge of Don, by Aberdeen, Thomas senior having by this time been promoted to Chief Coastguard Officer. Young Thomas was educated first at the recently opened parish school in Fraserburgh, then in primary schools in Grimsby, Collieston, and finally at the Chanonry School in Old Aberdeen.

In 1851, the Glover family moved to Braehead House in Balgownie Road, Bridge of Don.

Upon leaving school in 1857 Glover took a job as a shipping clerk with the trading company Jardine Matheson, dealing in fish and timber. In 1858, he joined the firm’s Far Eastern trading company and was soon posted to Shanghai. There he sold opium to middlemen, trading in silks, tea and guns, profiting from each deal, before relocating to Nagasaki to take advantage of the new opportunities offered by a Japan where the old order was crumbling.

The End of the Shogunate

Since the early 17th century Japan had been under military rule,  isolated from the rest of the world.  The Shogun was in charge, with the Emperor ruler in name only. Society was strictly ordered – an elite at the top of the social pile, with peasants, craftsmen and merchants at the bottom. Japan’s economic development was strangled by many rules and limitations to trade and industry, and beween 1848 and 1854 only a few foreign merchant ships could trade with Japan.  Eventually, however, general resentment at the privileges enjoyed by the elite  forced Shogun Tokugawa Yoshinobu to restore authority to Emperor Meiji. The 1868 rebellion that followed brought an end to 250 years of  isolation, finally opening Japan’s ports to goods from the west.

Glover saw an opportunity. He bought property, formed his own trading company and dealt (illegally) in ships and weapons with clans opposed to the policies of the shogunate. An original thinker with an eye to the main chance, Glover’s gifts in dealing with both sides enabled him to survive and prosper. His arms-dealing enabled the defeat of the old order so Japan could unify under its Emperor, and in the effort to industrialise the country. Thomas Glover also fought and traded with the warlords he later advised and influenced. He knew everyone, Japanese or foreigner – and his knowledge of western customs became useful to Japan, which was desperate to trade and to modernise.

Thomas Blake Glover went on to deal in property, coal mining and a brewery, pursuing international relations, developing interests and helping attract expertise and engineers, many of them Scottish, to realise projects in town planning, lighthouse-building and railways.

Three diamonds and the colours of the Japanese Flag form the Mitsubishi logo.

Yataro Iwasaki had set up a shipbuilding business which in 1873 was renamed Mitsubishi – meaning ‘three diamonds’ – from which the international Mitsubishi conglomerate would grow. The following year Glover was invited to join it, contributing both skill and significant capital. Both men also had the advantage of close links with former rebels now in positions of power in government. Glover had an interest in the Nagasaki shipyard which was purchased from the Japanese state, and then leased by Mitsubishi.

Ships were commissioned from Scots shipyards – first Aberdeen, later from the Clyde. Lobnitz & Co at Renfrew supplied the first vessel to the NYK, the Japanese shipping line. Several Japanese apprentices were trained in the yard and bookkeepers from Lobnitz helped introduce a modern accounting system at Mitsubishi.

The Japanese were able to visit Britain at last and see the wonders of the industrial revolution. Their students started to be sent to Scottish universities. 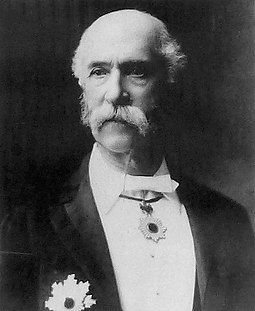 Glover’s House in Nagasaki, the first western style dwelling in Japan  was built in 1863. Known as Ipponmatsu (Lone Pine Tree), it was, amongst other things to be the venue for negotiations with warlords plotting the Shogunate’s downfall.

Thomas’ common-law wife, Yamamura Tsuru, was Japanese – he also had a number of Japanese mistresses, which was by no means unusual for European men living in Japan at the time. These liaisons and the house with its stunning garden, has also fuelled associations with Puccini’s Opera Madam Butterfly.

Glover is generally acknowledged in Japan as one of those who laid the basis for Japan’s modern industrialisation, and his home is consequently a site of pilgrimage, attracting around 2 million visitors each year  – Japan’s biggest tourist attraction. 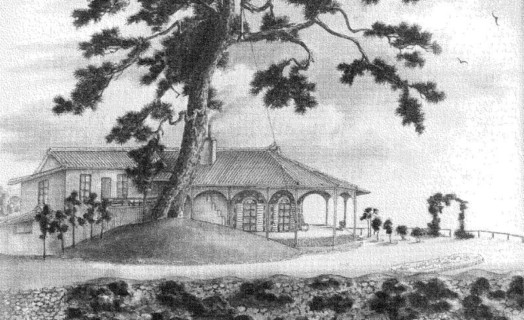