The concept of the Conservation Area was established by law in 1967[1] in response to widespread public concern about the pace of redevelopment of historic towns and cities.

In 1997 it was further defined[2] as ‘an area of special architectural or historic interest’, and as such, local authorities and Scottish Ministers are obliged to protect and enhance its character or appearance for current and future generations.

Fraserburgh Town Centre Conservation Area, designated in 2015, is outlined in this map. 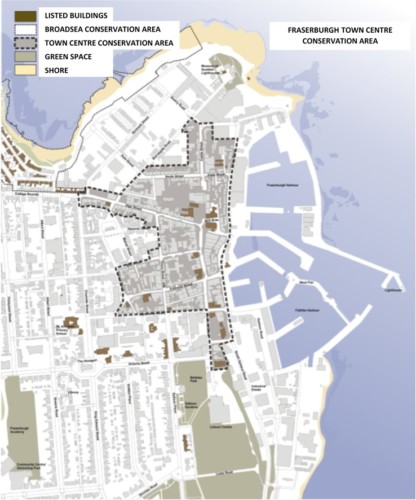 The area is significant as it is believed to be Scotland’s earliest planned town – the original street plan dates from the 1570’s and you can also see traces of development dating from the 17th, 18th and 19th centuries, reflecting different phases in Fraserburgh’s growth.

Key buildings mark several of the edges and corners of the boundary:

You can find out if your bulding is covered by the conservation area by checking the detailed map here.

Broadsea’s historic buildings have their own special character; it is also a Conservation Area.